What is a Commercial Fisherman?

A commercial fisherman catches and traps various types of marine life. The fish they catch are for human and animal consumption, bait, and other uses.

Duties include directing the fishing operation and recording the daily activities in the ship’s log. Increasingly, they use the internet to bypass processors, and sell fish directly to consumers, grocery stores, and restaurants.

What does a Commercial Fisherman do?

A commercial fisherman plans and oversees the fishing operation, the type of fish sought, location of the best fishing grounds, method of capture, duration of the trip, and sale of the catch. 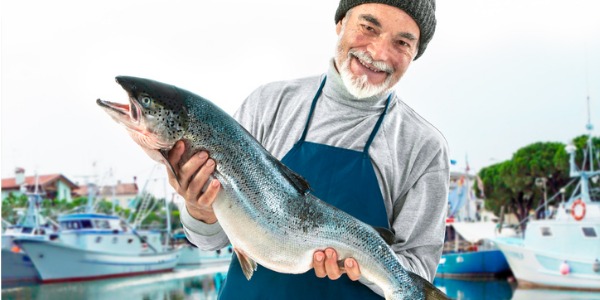 To plot the ship's course, commercial fishermen use compasses, charts, and electronic navigational equipment, including global positioning systems (GPS). They also use radar and sonar to avoid obstacles above and below the water and to find fish.

A commercial fisherman typically does the following:
- Locates fish using fish-finding equipment
- Directs fishing operations and supervises crew
- Steers vessels and operates navigational instruments
- Maintains engines, fishing gear, and other onboard equipment by doing minor repairs
- Sorts, packs, and stores catch in holds with salt and ice
- Measures fish to ensure they comply with legal size
- Returns undesirable or illegal catches to the water
- Guides nets, traps, and lines onto vessels by hand or by using hoisting equipment
- Signals other workers to move, hoist, and position loads

Some commercial fishermen work in deep water on large fishing boats that are equipped for long stays at sea. Some process the fish they catch on board and prepare them for sale.

Other commercial fishermen work in shallow water on small boats that often have a crew of only one or two members. They put nets across the mouths of rivers or inlets; pots and traps for fish or shellfish (such as lobsters and crabs); and dredges to gather other shellfish, such as oysters and scallops.

A small portion of commercial fishing requires diving with diving suits or scuba gear. These divers use spears to catch fish and nets to gather shellfish, sea urchins, abalone, and sponges.

Some fishermen harvest marine vegetation rather than fish. They use rakes and hoes to gather Irish moss and kelp.

Are you suited to be a commercial fisherman?

Commercial fishermen have distinct personalities. They tend to be realistic individuals, which means they’re independent, stable, persistent, genuine, practical, and thrifty. They like tasks that are tactile, physical, athletic, or mechanical. Some of them are also enterprising, meaning they’re adventurous, ambitious, assertive, extroverted, energetic, enthusiastic, confident, and optimistic.

Does this sound like you? Take our free career test to find out if commercial fisherman is one of your top career matches.

What is the workplace of a Commercial Fisherman like?

Fishing operations are conducted under various environmental conditions, depending on the region, body of water, and kinds of fish sought.

Storms, fog, and wind may hamper fishing vessels or cause them to suspend fishing operations and return to port. Sometimes the work environment can be unpleasant or dangerous.