What is a Yoga Instructor?

A yoga instructor is someone who teaches yoga. That is the simple answer to this question – but it requires that we answer another question: what is yoga?

Yoga is an ancient mind and body practice that can be traced back to Northern India over 5,000 years ago. The word yoga comes from the Sanskrit word yuj, which means ‘union’ or ‘to join.’ The practice of yoga combines movement, breathing techniques, and meditation to promote mental, physical, and spiritual wellbeing. It focuses on poses designed to stimulate peace and energy. Yoga is now a popular form of exercise throughout the world and is widely believed to increase endurance, strength, flexibility, and calmness.

There are several different kinds of yoga. Instructors may choose to teach just one or they may develop skills in multiple branches or disciplines. Regardless, their aim is always to connect the mind, body, and spirit and to support balanced, active lifestyles.

What does a Yoga Instructor do? 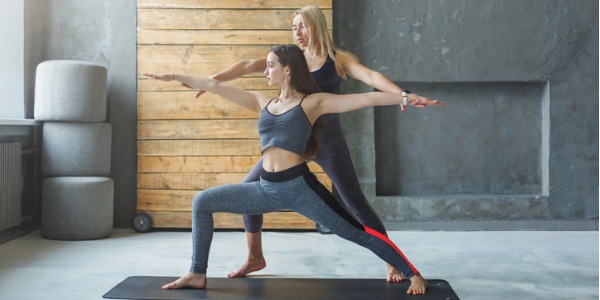 Yoga instructors teach people the art of yoga and how it can help them:

Each of the four primary types of yoga is treated as a path. Yoga instructors typically have an in-depth understanding of all paths, and believe that no matter the one chosen it will lead to enlightenment and the end of suffering. To get a better understanding of exactly what yoga instructors do, let’s take a look at the paths they facilitate:

Bhakti Yoga – Path of Devotion
The Sanskrit term Bhakti means ‘attachment, participation, fondness for, homage, faith, love, devotion, worship, purity.’ Bhakti yoga is considered a path to self-realization by becoming one with the divine being. Usually practiced through devotional chants known as bhajans and kirtans, this type of yoga helps harness intense emotions like anger and sadness by concentrating on the divine, making the practitioner (the yogi) realize the universal love that envelops them.

Jnana Yoga – Path of Knowledge
Jnana means knowledge in Sanskrit. Practitioners of Jnana yoga take a path of intellect and wisdom through meditation, the study of sacred texts, self-analysis, and contemplation. This enables them to be alert and stay focused, allowing them to gauge themselves as well as the world around them with precision and practicality. The practice of Jnana yoga helps yogis unveil the sheaths of illusions blinding them, allowing them to finally see the true meaning of life.

Karma Yoga – Path of Action
In Hinduism and Buddhism, karma stands for the sum of a person’s actions in this and previous states of existence, viewed as deciding their fate in future existences. Karma yoga focuses on doing good for others through selfless actions or service. Popular belief is that there is good and bad karma, but that is not exactly true. Karma is just karma – the use of your body, the release of the karmic (physical) energy within you. Through Karma yoga, yogis learn to be kind and compassionate without expecting anything in return. This helps them step away from their ego and get closer to their goal of enlightenment.

Raja Yoga – Path of Discipline
The word Raja means ‘king’ or ‘royalty’ in Sanskrit. Likewise, practitioners of Raja yoga become strong, confident, and self-assured. Raja yoga is the path towards personal enlightenment by balancing Bhakti yoga, Jnana yoga, and Karma yoga. The goal is to attain self-awareness and inner peace.

Just as there are many yoga paths, there are different yoga styles as well. These are among the most popular styles practised and taught across the globe:

Ashtanga Yoga
This style of yoga practice, which became popular during the 1970s, uses ancient yoga teachings. It applies the same poses and sequences that rapidly link every movement to breath, improving focus, balance, and coordination.

Bikram Yoga
Bikram yoga, also known as hot yoga, is practised in artificially heated rooms at a temperature of nearly 105°F and 40% humidity. It consists of 26 poses and a sequence of two breathing exercises. Bikram yoga has been shown to improve lower body strength, lower and upper body range of motion, and balance in healthy adults.

Hatha Yoga
Hatha is a generic term for any style of yoga that teaches physical poses. Hatha classes usually serve as a gentle introduction to the basic poses of yoga.

Iyengar Yoga
This yoga practice is concerned with the proper alignment of the body, making it ideal for those battling joint problems or recovering from injuries. It focuses on linking breath with precise poses that are held for long durations, sometimes with the help of a range of props, such as blocks, blankets, straps, chairs, and bolsters. The regular practice of Iyengar yoga can help boost mobility, strength, and flexibility.

Kripalu Yoga
This style of yoga teaches practitioners to know, accept, and learn from the body. A student of Kripalu yoga learns to find their own level of practice by looking inward. The classes typically begin with breathing exercises and gentle stretches, followed by a series of individual poses and final relaxation. Practicing Kripalu yoga can initiate a gradual process of physical healing, psychological growth, and spiritual awakening.

Sivananda Yoga
Sivananda yoga uses a five point philosophy as its foundation. It maintains that proper breathing, relaxation, diet, exercise, and positive thinking work together to create a healthy yogic lifestyle. Sivananda yogis use 12 basic asanas, which they precede with Sun salutations and follow with Savasana, the final resting pose at the end of almost every yoga practice. Sivananda yoga has been shown to enhance the flexibility of the muscles, joints, ligaments, and tendons, as well as stimulate circulation and strengthen the spine.

Viniyoga
Viniyoga is a holistic healing discipline that addresses the entire person (body, breath, mind, behaviors, emotions, and spirit) in an interconnected way. It focuses on form over function, breath and adaptation, repetition and holding, and the art and science of sequencing (the way in which yoga poses are placed in a particular order to create a yoga practice with a logical flow or focus on a particular outcome). Viniyoga accommodates different age groups and the varying levels of strength, stamina, balance, and range of motion that are a part of aging.

Prenatal Yoga
Prenatal yoga uses poses that have been created with pregnant women in mind. This yoga style can support health during pregnancy and help new mothers get back into shape after giving birth.

Restorative Yoga
Restorative yoga is meant to relax and rejuvenate the mind and body. A restorative yoga class involves four or five simple poses, using props such as blankets and bolsters to sink into deep relaxation without exerting effort when holding the pose. Individuals battling insomnia, anxiety, or other stress-related medical conditions may find restorative yoga particularly helpful.

No treatise on what yoga instructors do would be complete without reference to chakras. The word chakra means ‘spinning wheel.’ Yoga maintains that chakras are center points of energy, thoughts, feelings, and the physical body. According to yoga teachers, chakras determine how people experience reality through emotional reactions, desires or aversions, levels of confidence or fear, and even physical symptoms and effects.

When energy becomes blocked in a chakra, it triggers physical, mental, or emotional imbalances that manifest in symptoms such as anxiety, lethargy, or poor digestion. Yoga instructors apply this belief and understanding in their classes, using asanas – physical poses – to free energy and stimulate an imbalanced chakra.

There are seven major chakras, each with its own focus:

Yoga paths. Yoga styles. And chakras. All play a vital role in the work of yoga instructors, whose ultimate goal is always to help their clients make peace with who they are.

What is the workplace of a Yoga Instructor like?

One of the most appealing things about the yoga instructor’s job is that it can be done almost anywhere. All that is needed is a quiet space and a yoga mat.

Here are some of the most common workplaces for yoga instructors:

These diverse options allow yoga instructors to structure their work life in the way that suits them best. They can choose the demographic of clientele with which they want to work, the days and times they prefer to teach, and whether or not they want to teach at the same location day after day or have varied workplaces.