What is a Commercial Diver?

Do you love diving? Would you rather be diving than working at your desk? Maybe you'd like to consider becoming a commercial diver!

This career is about as far from a desk job as you can get. A commercial diver is a professional diver who is paid to go underwater to do specific tasks.

What does a Commercial Diver do?

There are a number of areas that a commercial diver can work in, such as construction, retrieval, maintenance, inspection, welding, repairs, deep sea exploration, and photography. 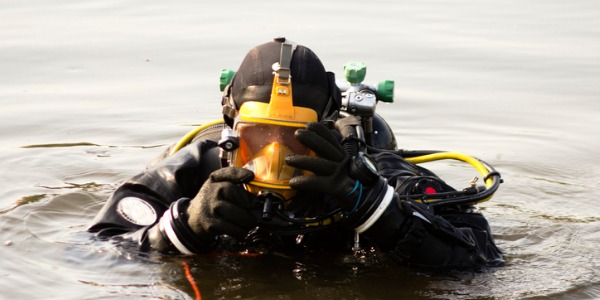 The following are types of divers and what they do:

Offshore Divers - are the most common type of commercial divers. They work for oil and gas companies that have offshore operations. Their job is to help explore, maintain oil platforms, and build underwater structures used in oil and gas production. The job is very demanding and it is even considered by some as the most dangerous diving job. A new diver will have a better chance in starting a career in commercial diving by doing offshore diving. This can also offer a lot of opportunities to travel abroad.

Onshore Divers - are more concerned with engineering projects. Here, qualified divers work mostly in freshwater such as rivers, lakes, and even dams. Divers help survey or build bridges and dams. This is not as difficult as offshore diving because divers don't have to spend long hours on ships. Onshore divers can go home after a day's work.

Naval Divers - are the military counterparts of offshore divers. However, they are very different from military divers. Naval divers inspect and clean ships and boats. They may also aid in inspecting underwater wreckage and the recovery of crashed planes and ships.

HAZMAT Divers - have a more dangerous job than other commercial divers because they deal with hazardous materials. These divers are at risk of contracting diseases that might put their lives in danger, which is why employers use safety measures like vaccinations against tetanus, hepatitis, and other diseases; specific places for decontaminating the diver and equipment after a dive; and contingency plans if the diver encounters a problem while underwater.

Media Divers - perform underwater filming and photography. They usually work for movie and television companies. They must be trained camera operators and are responsible for planning, researching, preparing equipment, and capturing the shot. This is a job that requires a lot of multi-tasking.

Are you suited to be a commercial diver?

Commercial divers have distinct personalities. They tend to be realistic individuals, which means they’re independent, stable, persistent, genuine, practical, and thrifty. They like tasks that are tactile, physical, athletic, or mechanical. Some of them are also investigative, meaning they’re intellectual, introspective, and inquisitive.

Does this sound like you? Take our free career test to find out if commercial diver is one of your top career matches.

What is the workplace of a Commercial Diver like?

Commercial divers typically work for construction, engineering, shipping, and oil companies. The most common job for a commercial diver is to work for offshore oil and gas exploration and production companies.

In the U.S., a commercial diver may spend a lot of hours at work. It is also common for divers to spend days or weeks on site (especially for offshore and media divers), and not have days off.

Onshore divers have a more favourable workplace since they work mostly in freshwater, and their hours are close to normal.

HAZMAT divers have a more dangerous workplace, so employers make sure that they are kept safe through vaccines, proper equipment, and specialized areas where they can decontaminate.