What is a Commercial Pilot?

Do you love to fly? Have you always dreamt of being a pilot?

What does a Commercial Pilot do? 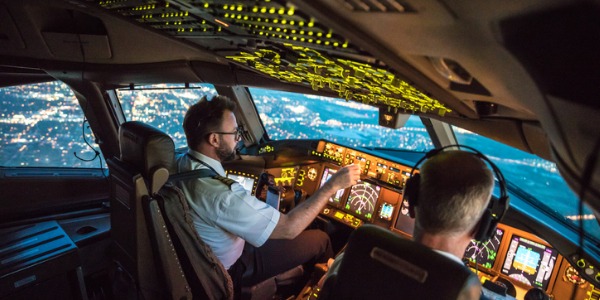 Commercial pilots typically do the following:
- Follow a checklist of preflight checks on engines, hydraulics, and other systems
- Ensure that all cargo has been loaded and that the aircraft weight is properly balanced
- Check fuel, weather conditions, and flight schedules
- Contact the control tower for takeoff and arrival instructions
- Start engines, operate controls, and steer aircraft along planned routes
- Monitor engines, fuel consumption, and other aircraft systems during flight
- Navigate the aircraft, using cockpit instruments
- Ensure a smooth takeoff and landing

For all but small aircraft, two pilots usually make up the cockpit crew. Generally, the most experienced pilot - the captain - is in command and supervises all other crew members. The copilot, often called the first officer, shares flight duties with the captain. These duties include communicating with air traffic controllers, monitoring instruments, and steering the plane.

Before departure, commercial pilots plan their flights carefully, checking various systems on the aircraft and making sure that baggage and cargo have been loaded correctly. They also confer with air traffic controllers to learn about weather conditions and to confirm the flight route.

Takeoffs and landings are the most difficult parts of the flight and require close coordination between the pilot and copilot. Once in the air, the captain and first officer usually alternate flying each leg of the flight. After landing, pilots must fill out records that document their flight and the maintenance status of the plane.

Commercial pilots employed by charter companies usually have many more non-flight duties. For example, they may schedule flights, arrange for maintenance of the plane, and load luggage to ensure a balanced weight.

Pilots who fly helicopters must constantly look out for trees, bridges, power lines, transmission towers, and other dangerous obstacles.

Regardless of the type of aircraft, all pilots must monitor warning devices that detect sudden shifts in wind patterns. Because warning signals can appear with no notice, pilots must be able to respond quickly to any impending danger. They work closely with air traffic controllers and flight dispatchers. As a result, they need to be able to coordinate actions on the basis of the feedback they receive.

Are you suited to be a commercial pilot?

Commercial pilots have distinct personalities. They tend to be realistic individuals, which means they’re independent, stable, persistent, genuine, practical, and thrifty. They like tasks that are tactile, physical, athletic, or mechanical. Some of them are also enterprising, meaning they’re adventurous, ambitious, assertive, extroverted, energetic, enthusiastic, confident, and optimistic.

Does this sound like you? Take our free career test to find out if commercial pilot is one of your top career matches.

What is the workplace of a Commercial Pilot like?

Depending on who they work for, they could spend a considerable amount of time away from home, sometimes overnight or longer.