What is an Explosives Worker?

An explosives worker is a highly trained professional who works with volatile substances such as industrial chemicals, weapons, and explosive demolition materials.

As the name implies, individuals in this line of work frequently deal with very dangerous substances and must have an exceptional ability to concentrate in order to keep themselves and those around them safe.

What does an Explosives Worker do?

There are many types of explosives workers; the specific tasks required for each position depends heavily on the academic and practical training that a specific worker has completed.

Due to the dangerous nature of this type of work, explosives workers must be able to concentrate in stressful, dangerous and potentially frightening situations, even when they are mentally and physically exhausted. They must have an excellent memory for details and be able to remember the properties and handling procedures for different explosive components. 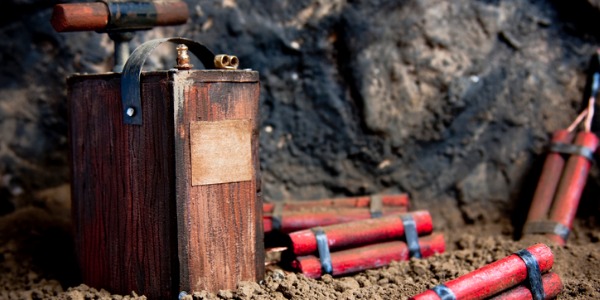 Some explosives workers are truck drivers who specialize in transporting dangerous materials. These individuals need a special driver's license that allows them to drive with volatile cargo.

Other explosives workers deal more directly with dangerous materials. They may assemble and package professional-quality fireworks or pyrotechnic devices for the film industry, or prepare dynamite charges for the mining industry.

Another type of explosives worker is responsible for placing the explosives in the specific area where they will later be detonated, without damaging them or causing them to explode prematurely. They keep other nearby workers safe from blasting accidents and chemical spills, and know how to handle explosives without harming other workers or civilians in the area.

Many explosives experts are civilians, but others are highly ranked members of the military. Explosive workers who are involved with the military often need special security clearance to do their job. This entails a series of extensive background checks and interviews. Obtaining the proper clearance can take months, and once an explosives worker has such clearance, it sticks with them even if they change jobs.

Are you suited to be an explosives worker?

Explosives workers have distinct personalities. They tend to be investigative individuals, which means they’re intellectual, introspective, and inquisitive. They are curious, methodical, rational, analytical, and logical. Some of them are also realistic, meaning they’re independent, stable, persistent, genuine, practical, and thrifty.

Does this sound like you? Take our free career test to find out if explosives worker is one of your top career matches.

What is the workplace of an Explosives Worker like?

Explosives workers may find themselves working in a variety of settings. This type of work is appealing for individuals who enjoy being outside and don't want to work in an office.

The mining industry employs explosives workers to set dynamite charges and expose new mineral veins; law enforcement and military applications for an explosives worker may include defusing bombs and rigging land mines. Other explosives workers work in construction and demolition, where they must choose which explosives to use, and where to place them so that a condemned building collapses safely and quickly.

Those who work in explosives transport will do most of their work from the cab of a truck. They may need to unload their vehicle, or provide direction to others who will do so.

Other explosives professionals, such as seismograph shooters and oil well shooters, spend many working hours outside and may be required to travel extensively for work. Seismograph shooters must often travel far into the wilderness to install underground sensors that will help detect earthquakes; oil well shooters should be comfortable working in water and living on a remote oil rig for weeks or months at a time.