What is a Model Maker?

Model makers craft three dimensional scale models that are used in a variety of situations. They use information and preliminary designs, or blueprints, to bring an idea into reality.

Often, model makers create 3D models for architects, based on the architect's initial design or blueprint. The model can help the architect evolve his project and see what needs improving. Model makers can also work on film sets as part of the special effects team.

Essentially, model makers are the people who take an idea and make it into a three dimensional piece, in order to bring the design or concept to life. They are a vital part of the artistic and design process for many different fields.

What does a Model Maker do? 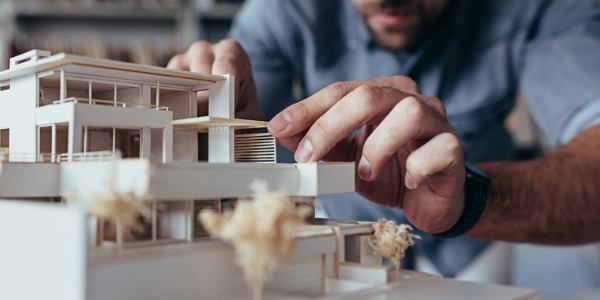 Model makers have a number of responsibilities in a variety of industries. When working with an architect, the model maker will be given the blueprints, or sketches, for the building that the architect is creating. This could be a sketch for a school, a hospital, or a home.

After receiving the sketch, the model maker and architect discuss the design and decide whether or not a simple or complex model is going to be created. With a simple model, they may just create a scale model, which outlines the basic three-dimensional structure of the building. If the architect decides that more detail is needed, the model maker may create a more complex model in which he includes aspects such as scaled down furniture, trees, and people.

Once a model is decided upon, they will examine the architect's designs carefully and come up with a plan for their model. They then carefully craft the model using a variety of materials and tools. Once the model is finished, the architect can get a three dimensional view of his blueprint. This helps the architect to get a clear vision for the rest of his designs in the architectural process.

Model makers also work in the film and television industry as part of the special effects team. In this sphere, they can be called upon to create a variety of models. For example, the film director may want to use a miniature model for some scenes rather than having to film on location. After a discussion with the film director to decide exactly what is needed, a model maker will then create the model and it will be used during filming.

Are you suited to be a model maker?

Model makers have distinct personalities. They tend to be realistic individuals, which means they’re independent, stable, persistent, genuine, practical, and thrifty. They like tasks that are tactile, physical, athletic, or mechanical. Some of them are also artistic, meaning they’re creative, intuitive, sensitive, articulate, and expressive.

Does this sound like you? Take our free career test to find out if model maker is one of your top career matches.

What is the workplace of a Model Maker like?

Model makers will often work with others in the preliminary stages of their job. This may be at an architect's office, a client's office, or in the special effects department of a film studio.

Once they have the design for what they are going to create, they can then return to their own shop or studio, or if they are working on a film set, they may return to work in the special effects department. Once they are in their shop or studio, they work alone to craft their three-dimensional piece. They work in a shop environment with various tools, often working long hours.

Those who are considering a career in the model making industry should be artistic, be able to communicate effectively with others. Model makers need to have an eye for detail, the ability to understand scale, have patience, and be able to focus for long periods of time.