What is a Quarry Rock Splitter?

A quarry rock splitter is someone who splits or separates blocks of rough stone from a quarry mass, using a jackhammer and wedges. It is a highly specialized job that is only done in stone quarries, which are a type of open-pit mine from which rock and minerals are extracted for use as building materials. For many people the idea of a rock quarry and someone breaking stone brings up visions of the cartoon character Fred Flintstone, who famously worked at Slate Construction. The cartoon made many references to the process of splitting quarry rock, often reflected through names such as Barney Rubble, Mr. Slate, movie star Rock Quarry, and the town of Bedrock itself. The real-life job is not significantly different from the cartoon version, although equipment and technology is changing the way a quarry rock splitter does the job.

What does a Quarry Rock Splitter do? 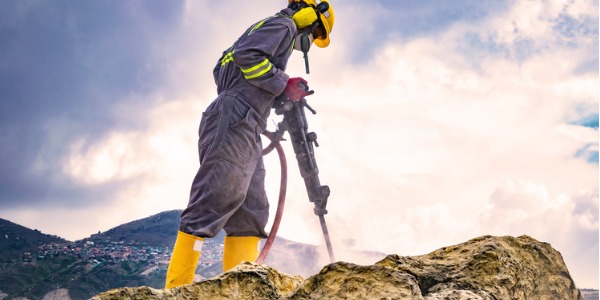 With the increasing popularity of stone kitchen countertops and stone flooring, and the demand for aggregate, the job retains importance. Stones such as granite, limestone, marble, slate, and sandstone are extracted, and concrete and aggregate building materials are manufactured from the materials remaining after large pieces are removed. Construction quarries exist all over the world, and there are many historic quarry sites that have existed for centuries. Environmentalists have led the movement to reclaim exhausted quarries, and these are often restored. The beautiful Butchart Gardens in Victoria, B.C., Canada is an example of a quarry that has been transformed into a massive garden and tourist attraction.

A quarry rock splitter must first locate the grain line patterns in the quarry to determine how the rock will split. Dimensions and outlines are marked with rules and chalk lines before any cutting begins. A number of different processes are then used to work with the rock itself. Explosives may be used to split large sections of rock. Jackhammers, wedges, sledgehammers, and other tools are used to split stone sections from the rock mass. Holes are drilled along the outline of the chalk lines with jackhammers. Grooves may be cut along the outlines with chisels for smaller stone sections.

Once the stone has been separated from the mass, drill holes are made into the sides and dogs are inserted or slings attached so the stones can be removed. The slabs of stone must then be cut into sheets that can be used for floors and counters.

Are you suited to be a quarry rock splitter?

Quarry rock splitters have distinct personalities. They tend to be realistic individuals, which means they’re independent, stable, persistent, genuine, practical, and thrifty. They like tasks that are tactile, physical, athletic, or mechanical. Some of them are also conventional, meaning they’re conscientious and conservative.

Does this sound like you? Take our free career test to find out if quarry rock splitter is one of your top career matches.

What is the workplace of a Quarry Rock Splitter like?

Work is outdoors and often subject to weather conditions. The job is highly physical and involves using arms and hands to position materials and manipulate equipment and rock. Workers must be able to handle and maintain machinery, including forklifts, jackhammers, and mechanical wedges, and they also must use manual tools such as sledgehammers. As the job becomes more modernized, quarry rock splitters must also know how to operate a computer in the workplace. Environmental concerns impact the workplace, and plans for reclamation often must be in place before extraction work can begin.

Work location can be almost anywhere in the world. There are large quarries in Canada, Australia, and the U.S., as well as in Mexico, Romania, New Zealand, China, and Russia, among other locations. High-quality marble quarries are found in China, Pakistan, Italy, Spain, Greece, Sweden, and the U.S.