What is a Childcare Worker?

What does a Childcare Worker do?

A childcare worker cares for the basic needs of infants and toddlers, changing their diapers and preparing their meals. They also maintain the children’s schedules, such as play, nap, and meal times. Others things they do include: 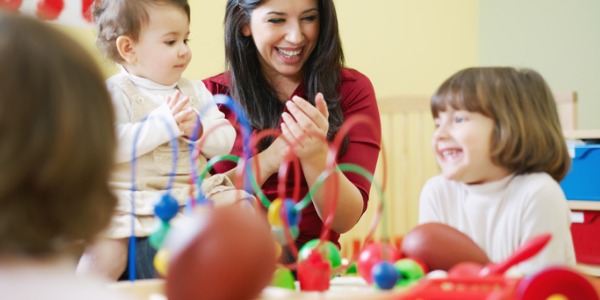 A childcare worker introduces babies and toddlers to basic concepts by reading to them and playing with them. For example, they teach young children how to share and take turns by playing games with other children. They often help preschool-aged children prepare for kindergarten. They use children’s play to improve the children’s language—for example, through storytelling and acting games—and their social skills—for example, through having them build something together in the sandbox. They may involve the children in creative activities, such as art, dance, and music.

Childcare workers often watch school-aged children before and after school. They help these children with homework and ensure that they attend after-school activities, such as athletic practices and club meetings. During the summer, when children are out of school, childcare workers may watch older children as well as younger ones for the entire day while the parents are at work.

The following are examples of types of childcare workers:

Childcare Centre Workers
- work in teams in formal childcare centres, including Head Start and Early Head Start programs. They often work with preschool teachers and teacher assistants to teach children through a structured curriculum. They prepare daily and long-term schedules of activities to stimulate and educate the children in their care. They also monitor and keep records of children’s progress.

Family Childcare Providers
- care for children in the provider's own home during traditional working hours. They need to ensure that their homes and all staff they employ meet the regulations for family childcare centres. After the children go home, the providers often have more responsibilities, such as shopping for food or supplies, doing accounting, keeping records, and cleaning. In addition, family childcare providers frequently must spend some of their time marketing their services to prospective families.

Babysitters
- like nannies, work in the homes of the children in their care. However, they work for many families instead of just one. In addition, they generally do not work full time, but rather take care of the children on occasional nights and weekends when parents have other obligations.

Are you suited to be a childcare worker?

Childcare workers have distinct personalities. They tend to be social individuals, which means they’re kind, generous, cooperative, patient, caring, helpful, empathetic, tactful, and friendly. They excel at socializing, helping others, and teaching. Some of them are also artistic, meaning they’re creative, intuitive, sensitive, articulate, and expressive.

Does this sound like you? Take our free career test to find out if childcare worker is one of your top career matches.

What is the workplace of a Childcare Worker like?

Childcare workers are employed in childcare centres, preschools, public schools, and private homes. They spend much of their day moving around the room to work with the children in their care. Carrying children, bending to lift children, and kneeling to be at eye level with children can be physically exhausting.