What is a Film and Video Editor?

A film and video editor is a highly skilled film industry employee who edits movies or videos. Much of the success or failure of a production lies in their hands. Many in the industry consider film editing to be an art that often goes unnoticed and unappreciated, with some dubbing film editing as 'the silent art'.

The history of film editing is a long trek, going back to the early heydays of Hollywood. As technology grew, the job descriptions of film editors expanded to include the field of video editors.

What does a Film and Video Editor do?

The film and video editor’s job has changed over the years. When movies were black and white, editing was simple. With computer and advanced technology, the job has become increasingly more complex. 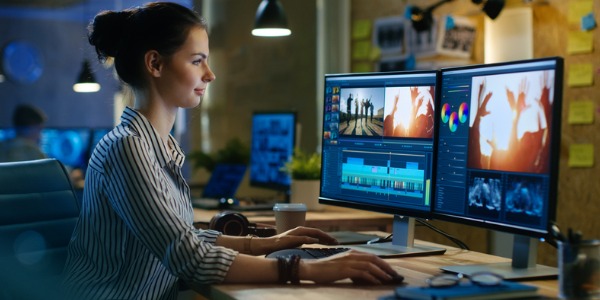 The job duties of film and video editors are numerous. They may find themselves studying scripts to understand the storyline and collaborating with directors, producers, and film staff regarding the script and director's goals.

Throughout the filming process, digital video tapes are examined for editing purposes, whether it's looking for errors, segments that run too long, or parts that do not go with the storyline.

Film and video editors collaborate with other professionals in the industry to add sounds, voices, and music that match the script, and then place all these elements in their appropriate places. They may also use computer software to create high-quality sound effects. Varying camera angles and shots will be looked at and the best ones added to the reels.

Making a movie is truly a team effort. The final production is a coherent project that incorporates the storyline and personality of the starring actors. The reels will be reviewed several times before the film and video editor comes up with a final version called the director's cut.

Are you suited to be a film and video editor?

Film and video editors have distinct personalities. They tend to be artistic individuals, which means they’re creative, intuitive, sensitive, articulate, and expressive. They are unstructured, original, nonconforming, and innovative. Some of them are also investigative, meaning they’re intellectual, introspective, and inquisitive.

Does this sound like you? Take our free career test to find out if film and video editor is one of your top career matches.

What is the workplace of a Film and Video Editor like?

These professionals work as team players with others in the industry, which may include other film editors, sound and lighting technicians, makeup and costume artists, actors, directors, and company owners.

Although film and video editors often work as part of a team, a large portion of their job is performed independently. They spend many hours in projection rooms, cutting labs, or computer rooms, editing the films alone. They are sometimes required to work long hours, especially during movie post-production.