What is a Back-End Developer?

A back-end developer enables the user-facing side of a website to exist. Back-end code adds utility to everything the front-end developer creates.

Back-end developers are responsible for creating, maintaining, testing, and debugging the entire back end of a website. This includes the core application logic, databases, data and application integration, API, and other back end processes.

What does a Back-End Developer do?

The behind-the-scenes functionality of a website is referred to as the 'back-end'. It is a combination of technology and programming that powers a website, consisting of three parts that a user never sees: a server, an application, and a database.

The back-end runs a website — the user doesn’t see it or interact with it, but it is always running in the background, delivering functionality and a desktop-like experience. Back-end developers play a critical role in web development teams, and make sure that data or services requested by the front-end system or software are delivered. 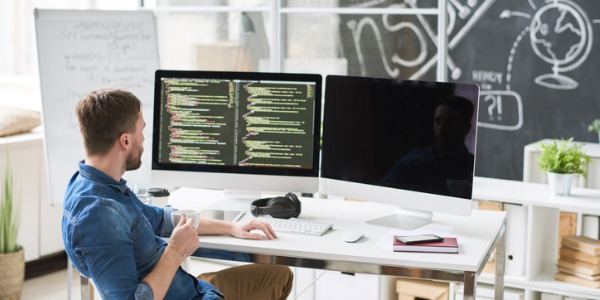 The back end is the combination of a database and software written in a server-side language, which is run on web servers, cloud-based servers, or a hybrid of both.

In order to make the server, application, and database communicate with each other, back-end developers use languages like PHP, Ruby, Python, Java, and .Net to build an application, and tools like MySQL, Oracle, and SQL Server to find, save, or change data and serve it to the user in front-end code.

After communicating with a business owner and understanding what their needs and technical requirements are, back-end developers use the aforementioned tools to create web applications with clean, well-documented code.

They come up with the most effective and efficient solutions for engineering technology by converting and returning data into front-end code a user can interact with, such as: filling out a form, creating a profile, shopping online, etc.

Responsibilities of a back-end developer can include working with:

Are you suited to be a back-end developer?

Back-End developers have distinct personalities. They tend to be investigative individuals, which means they’re intellectual, introspective, and inquisitive. They are curious, methodical, rational, analytical, and logical. Some of them are also conventional, meaning they’re conscientious and conservative.

Does this sound like you? Take our free career test to find out if back-end developer is one of your top career matches.

What is the workplace of a Back-End Developer like?

The life of a back-end developer typically involves working long hours. They can be found almost anywhere, working as full-time permanent employees in both large corporations, and small or medium-sized companies.

They can also work as freelancers or independent consultants, or as contractors for an employment agency.