What is an Artillery Crew Member?

An artillery crew member performs a specific task that is required during the operation or maintenance of an artillery piece such as a howitzer, rocket or missile launcher. Specific tasks may include positioning the gun, driving the vehicle, loading the gun, receiving target coordinates, changing gun settings, cleaning or making small repairs on the spot.

What does an Artillery Crew Member do?

An artillery gun piece such as a howitzer, a rocket launcher, or a surface-to-surface missile launcher is manned by an artillery crew that may consist of up to five members. The howitzer cannon is the classical example of an artillery weapon that requires a crew for its operation.

Artillery crew members may perform various tasks such as operating transport vehicles, setting the howitzer at its location, inputting target coordinates into the gun settings, loading the howitzer with ammunition, and firing on enemy positions according to received coordinates. 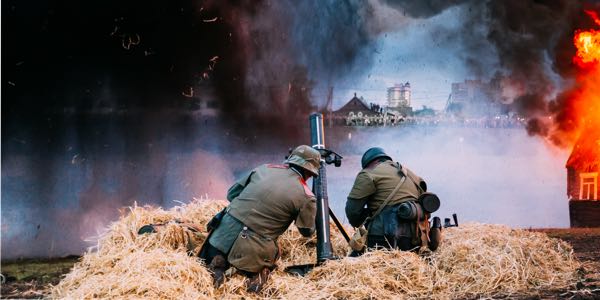 The operation of an artillery howitzer is a complex task that requires several components that need to be integrated. The crew of a howitzer usually does not see the enemy position on which they execute artillery fire. The artillery pieces are organized in batteries, that are located deep behind infantry positions.

Forward observers are the ones who actually visualize the target and relay target coordinates to a fire control centre, which transforms the data and computes gun parameters that are introduced by artillery crew members into howitzer settings.

Artillery crew members communicate with their superior officers who supervise the entire artillery battery or unit. They communicate with fire control specialists who make the necessary fire adjustments depending on the input received from forwards infantry units or a forward observer.

Artillery crew members need to effectively communicate between themselves to ensure quick decision making in stressful situations. A bond is usually formed between crew members of an artillery piece during military operations or training drills.

The artillery crew also receives permanent feedback that allows them to adjust the fire according to the input received by the forward observer. After coordinates are received and transformed into gun settings, the howitzer is loaded with ammunition and fire is executed. It may take up to five crew members to ensure a smooth operation of a howitzer, but in crisis situations, fewer crew members may operate the artillery piece.

Field artillery may receive requests for artillery fire from forward infantry units that are located in close proximity to the target, which means that they are vulnerable to poorly directed artillery fire. This places an enormous responsibility on the shoulders of artillery crew members, who need to provide fire that is properly directed with carefully relayed coordinates.

In crisis situations, artillery fire may save entire units from becoming surrounded by enemy forces or from direct fire of enemy artillery installations or tanks.

Are you suited to be an artillery crew member?

Artillery crew members have distinct personalities. They tend to be investigative individuals, which means they’re intellectual, introspective, and inquisitive. They are curious, methodical, rational, analytical, and logical. Some of them are also enterprising, meaning they’re adventurous, ambitious, assertive, extroverted, energetic, enthusiastic, confident, and optimistic.

Does this sound like you? Take our free career test to find out if artillery crew member is one of your top career matches.

What is the workplace of an Artillery Crew Member like?

On active duty, artillery crew members work on the field close to their howitzers. They may sleep and eat in tents together with their fellow crew members. In between missions, they may work on military bases, where they maintain the artillery equipment and conduct training drills.