What is a Control Center Specialist?

Command and control centre specialists work in command centres where all communication is relayed and analyzed by highly trained military staff who integrate various pieces of information into the big picture of the military operation or training drill.

It is a very demanding job due to the enormous amount of incoming data that must be sorted according to its importance, relevance and priority to ensure that proper decisions are made by high ranking military officials on time.

Command and control centre specialists have the responsibility of maintaining clear communication between units, components and task forces, and coordinating their activities on a higher scale.

They must analyze the incoming information quickly and effectively, and transmit it to military decision-makers who will decide on the best course of action.

What does a Control Center Specialist do?

During a mission or a training drill, there may be several units involved in the operation. Moreover, sometimes, units or components from different military branches operate together to accomplish their mission.

This is especially true of large-scale military operations that require excellent communication and coordination support to ensure a successful outcome. 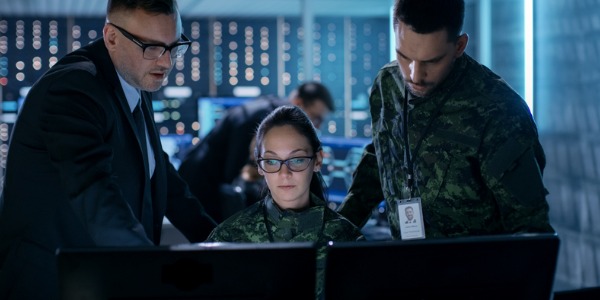 A large-scale military operation may be conducted by air force components, naval and ground elements, which requires tight coordination and supervision.

Because units are frequently located at considerable distances, all communication is relayed to specialized command and control centres where data is analyzed, prioritized and filtered to allow for the most effective allocation of military resources at any given moment.

For example, when several units request air support for their ground troops, command and control specialists must analyze the information, make sure they understand the urgency of each request and prioritize the data to make sure that air force elements will first respond where they are needed the most.

At the same time, this information will be sent to troop commanders who will analyze the battlefield situation and decide how to allocate their military resources.

Command and control centre specialists are responsible for effective and quick transmission of data between various components of military forces during joint action. They must be attentive to details that are communicated to them because their decisions may save lives on the battlefield.

Command and control centre specialists need to have the ability to distinguish between regular and critical messages, and allocate their time and efforts to address urgent crisis situations. Their task is also to inform higher ranking military officials about the current situation on the field, and on the stage of completion of various tasks assigned to different units or military components.

Command and control centre specialists also supervise and operate surveillance and detection systems, and they must alarm higher ranking officials when a threat is detected. Specialists work with weapon systems, making sure that correct target coordinates and settings are introduced into the system, and making appropriate adjustments with feedback received from forward observers, air force elements or ground troops.

They provide close logistical and tactical support to troops in critical situations, and analyze and send requests for reinforcements, artillery or air support. In some cases where government officials are implicated in the decision making process, command and control specialists provide concise, relevant and updated information on the current state of the mission on the battlefield.

Are you suited to be a control center specialist?

Control center specialists have distinct personalities. They tend to be investigative individuals, which means they’re intellectual, introspective, and inquisitive. They are curious, methodical, rational, analytical, and logical. Some of them are also enterprising, meaning they’re adventurous, ambitious, assertive, extroverted, energetic, enthusiastic, confident, and optimistic.

Does this sound like you? Take our free career test to find out if control center specialist is one of your top career matches.

What is the workplace of a Control Center Specialist like?

Command and control centers specialists work in special command centers where all military communication is relayed and analyzed.

They work with advanced communication equipment, but also weapon systems, detection and surveillance systems and radar equipment. Each military branch has its specifics when it comes to military communication and data analysis.