What is an Infantry Soldier?

An infantry soldier is trained in combat skills and arms within an armed service, and forms the backbone of any modern military capability.

Soldiers see service in all types of roles throughout the world, in peacetime, peacekeeping, and warlike activities. The job is physically demanding and often involves operating within high-stress and dangerous environments.

What does an Infantry Soldier do? 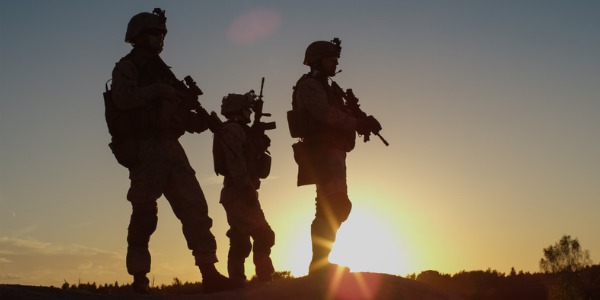 In times of peace, a soldier will spend their career honing their skills in training. When deployed, a soldier's duties may be to patrol areas for security or to seek out enemy combatants, post guard duty, conduct military attacks and defence, as well as escort and engage in protective duties.

A soldier will often carry specialized equipment and dress, such as their country's uniform, weapons, protective clothing/armour, and other gear pertinent to the task or degree of physical risk.

Infantry have the opportunity, where available, to train for specialized roles within their armed service, such as a sniper, in reconnaissance, special forces and heavy weapons.

Serving in the armed forces can be a challenging, exciting, and rewarding career. While it may not be for everyone, serving as an infantry soldier will provide an experience unequalled in civilian employment.

With a career such as this, it is worthwhile to do some research and check with serving or ex-serving members to gain a better understanding of the role, its commitment, and the risks involved.

Are you suited to be an infantry soldier?

Infantry soldiers have distinct personalities. They tend to be enterprising individuals, which means they’re adventurous, ambitious, assertive, extroverted, energetic, enthusiastic, confident, and optimistic. They are dominant, persuasive, and motivational. Some of them are also realistic, meaning they’re independent, stable, persistent, genuine, practical, and thrifty.

Does this sound like you? Take our free career test to find out if infantry soldier is one of your top career matches.

What is the workplace of an Infantry Soldier like?

Infantry soldiers see service within their armed forces all over the world. Domestically, they can be posted at a number of national locations and training facilities. Internationally, they may be deployed at a variety of locations, depending on international activity. A soldier might be deployed in international conflicts, as well as NATO, UN or another organization's peacekeeping or humanitarian missions.

A soldier's workplace can vary. There are tasks that are conducted within barracks environments — being duties, lessons, or work parties — or else field training on ranges or in rehearsals. Soldiers are often traveling or in remote locations for much of their careers.