What is an Athlete?

What do you think of when you hear the names Michael Jordan, Muhammad Ali, and Tom Brady? You think of athletes, of course!

The Thesaurus dictionary defines an athlete as "a person trained or gifted in exercises or contests involving physical agility, stamina, or strength; a participant in a sport, exercise, or game requiring physical skill."

But being an athlete involves more than just being strong and competing in athletic events. It requires hours and hours of practice every day and training for many years, usually under the guidance of a coach.

What does an Athlete do?

An athlete generally does the following:
- Attends scheduled practices and training sessions to develop their skills
- Exercises and practices under the direction of coaches, or sports instructors
- Stays in the best physical condition by training and following special diets
- Takes instructions from coaches and other sports staff regarding strategy and tactics
- Plays or competes in their sport, obeying the rules of the sport
- Assesses how they did after each event, identifying their strengths and weaknesses 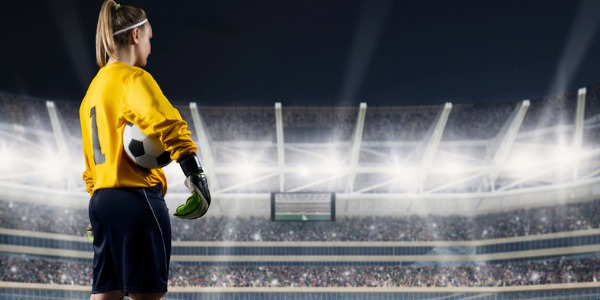 When playing a game, an athlete must understand the game strategies while obeying the rules and regulations of the sport. The events in which athletes compete include team sports, such as baseball, softball, hockey, and soccer, and individual sports, such as golf, tennis, swimming, and skiing. The level of play varies greatly, where sometimes the best from around the world compete in events broadcast on international television.

Being an athlete involves more than competing in athletic events. Athletes spend many hours each day practicing skills and improving teamwork under the guidance of a coach or a sports instructor. They view videotapes to critique their own performances and techniques and to learn their opponents' tendencies and weaknesses so as to gain a competitive advantage.

Some athletes work regularly with strength trainers to gain muscle and stamina and to prevent injury. Many athletes push their bodies to the limit during both practice and play, so career-ending injury is always a risk; even minor injuries may put a player at risk of replacement.

Because competition at all levels is extremely intense and job security is always in question, many athletes train throughout the year to maintain excellent form, technique and peak physical condition. Few people who dream of becoming a paid professional athlete beat the odds and make a full-time living at it. Very little downtime from the sport exists at the professional level.

Are you suited to be an athlete?

Athletes have distinct personalities. They tend to be realistic individuals, which means they’re independent, stable, persistent, genuine, practical, and thrifty. They like tasks that are tactile, physical, athletic, or mechanical. Some of them are also enterprising, meaning they’re adventurous, ambitious, assertive, extroverted, energetic, enthusiastic, confident, and optimistic.

Does this sound like you? Take our free career test to find out if athlete is one of your top career matches.

More than half of all athletes are employed in the spectator sports industry. Those who participate in competitions that are held outdoors may be exposed to all weather conditions of the season in which they play their sport. Additionally, they must travel to sporting events, which may include long bus rides or, in some cases, international air travel.