What is an Aerospace Engineer?

If you are interested in designing and building machines that fly, this career may be the right choice for you!

An aerospace engineer designs, tests, and manages the manufacturing of aircraft, spacecraft, satellites, and missiles. They also test prototypes to make sure they function properly according to design, and develop new technologies to be used in space exploration, aviation, and defense systems.

Aerospace engineers can specialize in a specific type of aerospace product, such as missiles and rockets, military fighter jets, spacecraft, helicopters, or commercial aircraft. Or they may choose to specialize in specific areas, such as instrumentation and communication, navigation and control, structural design, guidance, or production methods.

They work mostly in analysis and design, manufacturing, industries that perform research and development, and the federal government.

What does an Aerospace Engineer do? 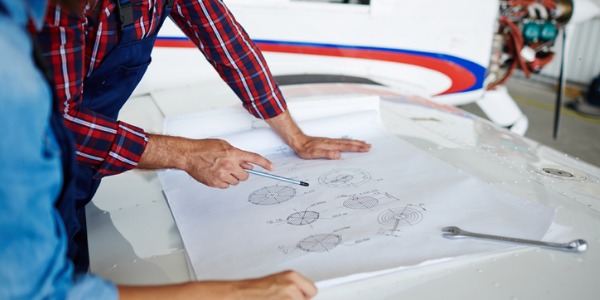 Aerospace engineers design, analyze, test, troubleshoot and develop advanced technology in defense systems, spacecraft, and aviation. They develop the standards for quality control and design processes, identify issues for products that aren't working properly, and try to find solutions to fix those issues.

Aerospace engineers may choose to specialize in areas such as aerodynamic fluid flow, structural design, guidance / navigation and control, instrumentation and communication, robotics, or propulsion and combustion.

They can specialize in designing different types of aerospace products, such as commercial and military airplanes and helicopters, remotely piloted aircraft and rotorcraft, spacecraft, including launch vehicles and satellites, and military missiles and rockets.

Aerospace engineers can apply their knowledge to any part of the engineering process: design, analysis, integration, testing, deployment, or maintenance. They can also hone in on the analysis areas, such as: mechanical / structural design, dynamics, programming, and electronics.

Aerospace engineers are typically well-suited to project engineering, systems engineering, and business roles - these are roles where system-level knowledge as well as math and science knowledge is needed to make, and back up, any decisions.

Aerospace engineers can choose to specialize in one of two types of engineering: aeronautical or astronautical.

Aeronautical engineers design, develop, manufacture and maintain both civil aircraft and military aircraft, aeronautical systems and aeronautical components in order to improve fuel efficiency and improve flight safety. They also keep in mind the importance of reducing costs and lowering the environmental impact of air travel.

Are you suited to be an aerospace engineer?

Aerospace engineers have distinct personalities. They tend to be investigative individuals, which means they’re intellectual, introspective, and inquisitive. They are curious, methodical, rational, analytical, and logical. Some of them are also realistic, meaning they’re independent, stable, persistent, genuine, practical, and thrifty.

Does this sound like you? Take our free career test to find out if aerospace engineer is one of your top career matches.

What is the workplace of an Aerospace Engineer like?

Aerospace engineers work in offices, laboratories, or manufacturing environments where they design or build aircraft, spacecraft, missiles, or systems for national defense. They work for either private companies or the federal government where they can engage in manufacturing, analysis and design, and research and development.