What is an Audio Engineer?

Do you have a great ear for music? Would you prefer a more technical way of expressing your musical talent? A career as an audio engineer might be a perfect career fit!

An audio engineer (or a sound engineer) works with the mechanics of recording, mixing, and reproducing sound. Audio engineers are not the same as sound producers, writers, or performers, as they deal specifically with the technical and mechanical aspects of music and sound — nothing else.

What does an Audio Engineer do?

An audio engineer works with the technical aspects of sound during the processes of recording, mixing, and reproduction. Audio engineers often assist record producers and musicians to help give their work the sound they are hoping to achieve.

For example, an audio engineer will piece together parts of a song, use auto-tune on a recording, and/or add synthetic sounds to a track. Audio engineers are different from producers. However, some audio engineers go on with their careers to double as producers or assume the role of producer. 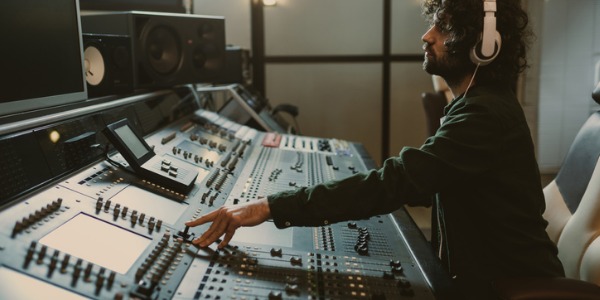 There are several subfields of audio engineering that one can become involved in:

Studio Engineer
A studio engineer works closely with producers in a studio. Sometimes studio engineers double as the producer and work independently.

Assistant Engineer
An assistant engineer usually works in a studio setting as well. They are often apprentices to studio engineers who own or work in large facilities.

Recording Engineer
A recording engineer is someone who focuses specifically on the aspect of recording sound.

Game & Audio Design Engineer
A game & audio design engineer helps work with the sound engineering on video games, as well as how to appropriately add sound to the game.

Mix Engineer
A mix engineer focuses on mixing together different tracks to mesh and create a new track.

Mastering Engineer
A mastering engineer smooths over the results of a mix engineer, making the final product into a whole.

Live Sound Engineer
A live sound engineer works at live events to make sure the sound is of appropriate value and high quality.

Monitor Engineer
A monitor engineer works with live sound engineers to help the performers at a live event hear themselves.

Are you suited to be an audio engineer?

Audio engineers have distinct personalities. They tend to be artistic individuals, which means they’re creative, intuitive, sensitive, articulate, and expressive. They are unstructured, original, nonconforming, and innovative. Some of them are also realistic, meaning they’re independent, stable, persistent, genuine, practical, and thrifty.

Does this sound like you? Take our free career test to find out if audio engineer is one of your top career matches.

What is the workplace of an Audio Engineer like?

Where an audio engineer works depends on their personality, experience, subfield, work ethic, location, and salary requirement. There are many different locations in North America and throughout the world for audio engineers to find employment.