What is a Detective?

Are you an investigative individual, with an inquisitive and curious mind? You may want to consider a career as a detective!

Technological advances have moved many detectives from the streets to the computer, while crime solving has become just a small sector of the market for detectives. Some find the unstructured nature of investigation to be a better fit than a more traditional career.

What does a Detective do?

There are two basic types of detectives — public and private. Solving puzzles is an important part of the job, regardless of the application.

Private detectives - are often former police officers, spies, military personnel, bodyguards, and security guards. While many private detectives investigate criminal matters, they are limited to the powers of citizen's arrest and detention, as they do not have police authority.

Public Detectives - investigate activities related to criminal acts and suspected criminal activity. They fall under the category of public because their salaries come from taxes and government funding. 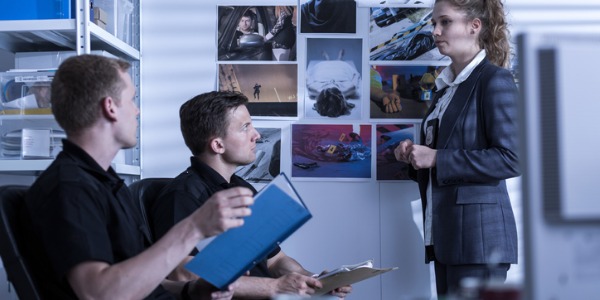 The applications for investigative skills span all industries. Corporations use detectives to perform background checks, while consumers hire detectives to follow a suspected cheater or look up references on a nanny. Law enforcement detectives solve crimes after the fact, and work to prevent the commission of crimes.

Many private detective firms also offer security solutions. Assessing the security measures in place to protect a building or adding technical security for a network can fall under a contract with the right detective agency.

There are specialized police detectives for every type of crime. For example, police detectives can specialize in fraud, white-collar crime, burglary, homicide, sex crimes, narcotics, vice, etc. Detective positions are either promotions or lateral transfers from within the police department, therefore a police detective is required to first work as a police officer for at least two to three years, usually in the patrol division, before applying to be a detective in a special unit. A few years spent working as a police officer is very beneficial, as it is valuable experience in learning about people, laws, and criminal processes; all of which make for better detectives.

Police detectives often spend two to several years in one special unit before they move to another. Moving to other special units not only serves to widen their knowledge base and experience, but also prevents burnout (the job of a police detective is not as exciting or glamorous as movies and television programs would have you believe).

Police detectives spend most of their time working on detailed investigations. They work daily to gather tangible evidence of drug trafficking, terrorist activity, and other crimes. They may work undercover or through an informant; sometimes simply observing, monitoring, and recording the activities of known criminals is enough to gather necessary evidence for an indictment. Most substantial evidence, however, is obtained through the interrogation of both criminals and witnesses. Before making any arrests, police detectives must ensure that the collective evidence is accurate, true, and reliable. The best evidence in any crime is a direct confession, and police detectives have the right to use psychological techniques, misdirection, and lies to encourage a criminal to confess.

Police detectives need to have incredible attention to detail and be able to keep meticulous records. They also need to possess a high level of patience, as some crimes take years to solve.

Some Daily Activities of a Police Detective:

Forensic Detective
Forensic science is a field that utilizes three scientific branches: biology, physics, and chemistry. Its focus is on recognizing, identifying, and evaluating physical evidence. Since it utilizes such a broad spectrum of sciences to extract information pertinent to legal evidence, it has become an integral and essential part of the judicial system (in both defense and prosecution arguments).

Forensic detectives (also known as forensic investigators) use scientific methods and their scientific knowledge to investigate and analyze physical evidence from a crime scene. They help solve crimes by determining how and when a crime occurred and who perpetrated it by analyzing relevant samples and running scientific tests. They collect evidence from the crime scene such as fingerprints, bodily fluids, and weapons, as well as write notes on their observations, take photographs, make sketches, and bag samples to take to the lab for later analysis. They write detailed reports and use solid scientific evidence in order to prove what occurred and often have to testify in court. Their evidence has to stand up to extreme scrutiny, especially in court.

By examining physical evidence, conducting tests, interpreting data, and writing detailed reports, a forensic detective can give a truthful testimony in court and often prove the existence of a crime or a connection to a crime. Since their only objective is to produce evidence based purely on scientific facts, the testimony of forensic detectives has become a trusted part of many criminal cases.

Forensic detectives typically need a bachelor’s degree in forensic science or a natural science such as chemistry or biology. Some forensic detectives get their start as police officers who transferred to forensics after obtaining the necessary education.

New forensic investigators typically apprentice with more experienced forensic detectives to get extensive on-the-job training. Training times vary depending on what is being taught. For example, DNA analysis training can last six months, and firearms analysis training can take up to three years. This profession requires constant learning to keep up with advances in forensic technology.

Computer Crime Detective (or Computer Crime Investigator)
Cybercrime involves a computer and a network that may either be the target of a crime, or may be used in a crime. This type of crime has the potential to harm a person or even a nation's security (cybercrimes crossing international borders and involving the actions of at least one nation-state is sometimes referred to as cyberwarfare).

Cybercrimes are defined as: "Offences that are committed against individuals or groups of individuals with a criminal motive to intentionally harm the reputation of the victim or cause physical or mental harm, or loss, to the victim directly or indirectly, using modern telecommunication networks such as Internet (networks including chat rooms, emails, notice boards and groups) and mobile phones." - Cyber Crime and the Victimization of Women: Laws, Rights, and Regulations

According to a report (sponsored by McAfee), published in 2014, it is estimated that the annual damage to the global economy was $445 billion. Approximately $1.5 billion was lost in 2012 to online credit and debit card fraud in the US. In 2018, a study by Center for Strategic and International Studies (CSIS), in partnership with McAfee, concludes that close to $600 billion, nearly one percent of global GDP, is lost to cybercrime each year.

Some computer crime detectives test corporate security systems that are already in place. Businesses and organizations need these professionals to help improve their networks, applications, and other computer systems in order to prevent data theft and fraud. By attempting to bypass system security and by trying to find and expose any weak points that could be taken advantage of by a malicious hacker, vulnerabilities are typically found in improper system configuration and in hardware or software flaws.

A computer crime detective's job responsibilities may include:

Detectives sometimes fill in a gap that is outside of the mandate of the the public police force. Some of the most common tasks performed by private investigators include:

Finding a Parent
Adopted children frequently wish to meet their genetic parents. Tracking down the birth parents from a closed adoption proceeding takes considerable time and effort. Most adoptees have no idea where to start. Investigators have access to resources that the average person can't get to.

Recovery of Lost/Stolen Property
Unless a missing item is worth a considerable sum, the police force will not spend much time looking for it. They are often hampered by jurisdictional boundaries. Private investigators have no issues with jurisdiction, though they may need to request the help of local law enforcement to retrieve the stolen object.

Investigative Due Diligence
Private detectives can be called upon to perform due diligence for a client's high-risk business or investment venture. A potential investor considering investing with a specific investment group or fund manager could avoid being the victim of a fraudulent company or Ponzi scheme. An experienced detective could investigate whether the investment is risky or the people behind the venture have suspicious backgrounds. Investigative due diligence is becoming more popular now, especially with the recent reports of large-scale Ponzi schemes and fraudulent investment vehicles.

Are you suited to be a detective?

Detectives have distinct personalities. They tend to be investigative individuals, which means they’re intellectual, introspective, and inquisitive. They are curious, methodical, rational, analytical, and logical. Some of them are also enterprising, meaning they’re adventurous, ambitious, assertive, extroverted, energetic, enthusiastic, confident, and optimistic.

Does this sound like you? Take our free career test to find out if detective is one of your top career matches.

Detectives that specialize in background checks spend most of their time at a desk, cross referencing information, and using computer databases. Surveillance specialists spend most of their days in a vehicle observing a subject and writing reports. The work schedule is rarely traditional, though there are corporate positions offering a mostly 9-5 workday.

Detectives may be called out for emergency cases, security issues or surveillance projects at any time of the day or night. Even investigators employed by the local or federal police force are on call for emergencies. Federally employed investigators also may be asked to travel on very limited notice.