What is a Forensic Scientist?

Forensic science is a critical component of the criminal justice system and forensic scientists are the practitioners of the disciplines that make up the science.

The word forensic comes from the Latin word forensis, which means a public discussion or debate. In a modern context, ‘forensic’ is defined as relating to or denoting the application of scientific methods and techniques to the investigation and solving of crime.

Common laboratory disciplines include forensic molecular biology (DNA), forensic chemistry, trace evidence examination (hairs and fibers, paints and polymers, glass, soil, etc.), latent fingerprint examination, examination of firearms and toolmarks (any impression, scratch, gouge, cut, or abrasion made when a tool is brought into contact with another object), handwriting analysis, fire and explosives examinations, forensic toxicology (the analysis of biological samples for the presence of toxins, including drugs), and digital evidence.

In the field and in the laboratory, forensic scientists draw from physics, chemistry, biology, and other scientific branches to uncover, identify, evaluate, and interpret physical evidence that may prove the existence of a crime, the perpetrator of crime, or a connection to a crime.

In the courtroom, forensic scientists are expert witnesses, permitted to testify not just about the scientifically factual results of their testing and analysis, but also to give an opinion about what those results mean.

What does a Forensic Scientist do? 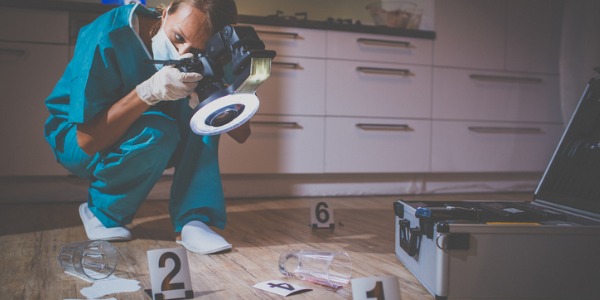 Forensic scientists and technicians aid criminal investigations by collecting and analyzing evidence. Many specialize in either crime scene investigation or laboratory analysis.

In the crime lab, the responsibilities of the forensic scientist are to:

Regardless of their individual job descriptions, the collective work of forensic scientists links various disciplines of science to legal matters. Here is an overview of those disciplines and how each of them is an essential link in the criminal justice system.

Trace Evidence Analysis
Trace evidence is anything that is transferred during the commitment of a crime, such as human or animal hair, rope, soil, fabric fibers, feathers, building materials, etc. Trace evidence analysis involves the recovery of such evidence and its forensic examination to provide crucial links to the perpetrator and to obtain information that can be used in a court of law or to answer any other legal query.

Forensic Toxicology
Forensic toxicology is the study of the presence of toxic substances inside a body and the effect that they had on the individual. It encompasses methods and procedures from various disciplines such as analytical and clinical chemistry, and pharmacology to aid in the medical and legal investigation of death due to poisoning or drugs. This branch of forensic science is of prime importance in road accidents, poisoning, and sexual violence.

Forensic Podiatry
Forensic podiatry deals with the application of specific podiatric knowledge – an understanding of the abnormalities and diseases of the ankle, foot, and lower body, as well as lower limb anatomy and musculoskeletal function. This is particularly helpful in the investigation of foot-based evidence with respect to a criminal incident.

Forensic Pathology
Forensic pathology is the branch of pathology that deals with the examination of a corpse to determine the cause of death. It involves collecting and analyzing medical samples to deduce facts admissible in a court of law. For example, a forensic pathologist can examine a wound to identify the weapon which caused it. Forensic pathology, therefore, helps draw crucial inferences on whether a death is natural, criminal, or accidental. 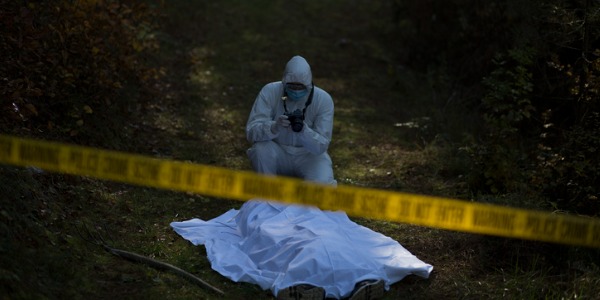 Forensic Odontology / Forensic Dentistry
Forensic odontology involves the proper handling, analysis, and evaluation of any form of dental evidence that would later be used as legal evidence in a court of law. Often when the victim’s body is left in an unrecognizable state, it is forensic odontology that helps investigators identify them. Forensic dentists play a crucial role in the comparative identification of a person by analyzing the development and anatomy of the teeth, including fillings or other restorative dental corrections. Forensic odontology is prominent in criminal investigations involving bite marks.

Forensic Linguistics
Forensic linguistics involves the application of linguistic knowledge and methods to criminal investigations and judicial proceedings. Linguistic experts are skilled at analyzing the written and spoken language of a perpetrator to draw crucial inferences about the offender’s age, gender, education level, culture, ethnicity, socio-economic and geographical background, even spiritual and religious beliefs. They examine forensic texts such as emergency calls, demands of ransom, suicide notes, social media, and death row statements.

Forensic Geology
Forensic geology or geoforensics deals with the examination of evidence related to materials found in the Earth such as oil, petroleum, minerals, soil, and rocks. Forensic geologists analyze earth materials recovered from the incident scene, victim, or suspect to strengthen evidence, draw inferences about the time and cause of the incident, and to obtain other information relevant to the investigation.

Forensic Entomology
Forensic entomology, also referred to as medico-legal entomology, is the study of the insects associated with a human corpse in an effort to determine the location of an incident, postmortem interval, precise time of the infliction of wounds, and elapsed time of death.

Forensic Engineering
Forensic engineering is concerned with the examination of products, materials, mechanical components, or structures that fail or are unable to function as desired, resulting in personal injury or property damage. Forensic engineers apply engineering principles to the investigation and analysis of such mechanical and structural failures.

Forensic DNA Analysis
In addition to fingerprints, DNA is the other biological parameter which is unique to a particular individual. DNA profiling is a forensic technique commonly used in criminal investigations to identify an anonymous person or to zero in on the perpetrator. The biological evidence used for DNA profiling includes hair, skin, semen, urine, blood, saliva, and even body remains in burn cases.

Forensic botanists do not normally deal with human remains. Their main role is to make connections between evidence and the crime. Pollen is an excellent tool for connecting suspects to the scene or determining if the body has been moved or not. The powder like substance released by plants during their reproductive cycle is produced in large quantities and easily carried by wind, clothing, hair, and skin.

Forensic Archaeology
Forensic archaeologists use geophysical and geological surveying techniques, along with photography and imaging to help police and investigating officers identify the site where the victim’s body and personal items, weapons, or stolen goods are buried. They are adept at using a range of techniques, such as carbon dating, to ascertain the age of items retrieved during an excavation. These forensic specialists often carry out mass excavations to produce evidence for war crimes trials, gas or bomb explosions, plane crashes, and the like.

Forensic Anthropology
In cases where bodies are rendered unrecognizable due to mutilation, burning, natural degradation, etc., forensic anthropologists are called in to examine human bodies or skeletons to help identify victims and arrive at the cause of death. These specialists are skilled at determining the age, sex, race, and physique of an individual from bones or bone fragments. They can also ascertain the manner of death – suicide, accidental, or disease – as well as if a specific bone injury occurred before, during, or after the death.

Digital Forensics
Digital forensics is the branch of forensic science that focuses on identifying, acquiring, processing, analyzing, and reporting on data stored electronically. Because electronic evidence is a component of almost all criminal activities, digital forensics support is crucial for law enforcement investigations.

Electronic evidence can be collected from a wide array of sources, including computers, smartphones, USB drives, remote storage, and more. The main goal of digital forensics is to extract data from the electronic evidence, process it into actionable intelligence, and present court-admissible findings for prosecution.

Forensic Ballistics
Forensic ballistics involves the examination of evidence from firearms – bullets, bullet marks, shell casings, gunpowder residue, etc. – that may have been used in a crime. The objective of the forensic ballistics specialist is to draw inferences on the exact weapon used; the distance, velocity, and angle of the firing; and ultimately the shooter. 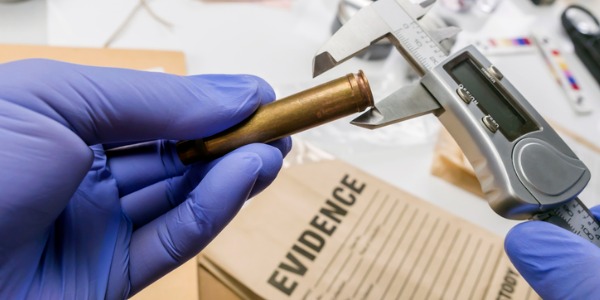 What is the workplace of a Forensic Scientist like?

Crime labs and coroner’s offices operated by local governments are the largest employers of forensic scientists. Federal and state agencies and labs, independent testing laboratories, and medical / diagnostics laboratories are also common workplaces for these professionals.

While many specialist forensic scientists work only in laboratories, others may be required to work outside in all types of weather. Crime scene investigators often travel throughout their municipal, county, or state jurisdictions.

They may work staggered day, evening, or night shifts and may have to work overtime or on weekends, since they must always be available to collect or analyze evidence. Even lab-based technicians, who usually work a standard workweek, may be called to the lab outside of normal business hours if a case needs immediate attention. Court appearances to offer expert testimony are also part of the job.