What is an Astronaut?

Did you dream about becoming an astronaut when you were a kid? Well, that childhood dream can actually become a reality with a whole lot of training!

Astronauts are trained to pilot and/or travel in a spacecraft, work in space, and do activities related to human space exploration. While space flight may now seem routine, every trip into space can be a walk between success and disaster. Therefore most of an astronaut's career is spent undergoing extensive training.

What does an Astronaut do?

In 1958, the National Aeronautics and Space Administration (NASA) adopted the word astronaut (meaning "sailor among the stars") for the men and women they would train to go into space. The Soviet space agency came up with a similar term, cosmonaut (which means "sailor of the universe") at about the same time.

In the early days, the job description of an astronaut was basically that of being an observer — someone who would view and document what was happening. It didn't take long for NASA to understand that human interaction would be required. 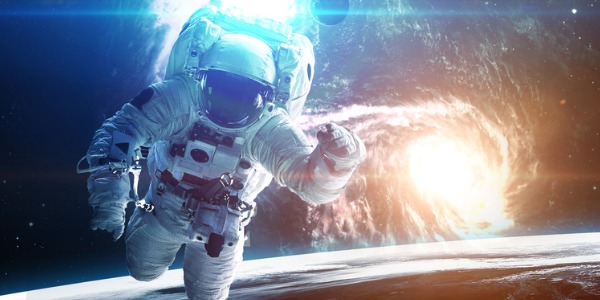 Today, two types of astronauts are selected for space flights:

The Johnson Space Center provides a number of simulators and facilities to prepare the astronauts for their work in space, such as a neutral buoyancy simulator, which simulates weightlessness on earth, and a 200' long and 40' deep pool where astronauts train for spacewalks underwater.

When in orbit, most of the time is spent in the craft or space station. At times, a spacewalk is required to make repairs, or to deploy a satellite, and the astronaut must wear a space suit, or an EMU (extravehicular mobility unit) for protection. Most missions last two to three weeks, but long duration missions may run as long as half a year. Training for long duration missions is very arduous and takes approximately two to three years.

Basic Training for Astronaut Candidates
Astronaut candidates report to the Johnson Space Center (JSC) in Houston, Texas, which has trained more than 300 U.S. astronauts and 50 astronauts from other countries in its fifty year history. As well, more and more Americans now train at Star City, a cosmonaut training facility near Moscow (especially since the end of the U.S. space shuttle program in 2011).

Basic training is the first phase, lasting two years. The candidates learn about vehicle and space station systems, and most of the training takes place in the classroom. Key disciplines that may prove to be helpful in their work in space are studied, such as meteorology, engineering, space science, and earth sciences.

Survival training must also be completed outside of the classroom (military-water-and-land-survival), in order to prepare for an unplanned landing back on earth. The candidates must become scuba certified, and must also pass a swimming test; they must swim three lengths of a 25-meter (82-foot) pool without stopping, and then swim three lengths of the pool in a flight suit and tennis shoes with no time limit. They must also tread water continuously for 10 minutes while wearing a flight suit. Both the scuba certification and the swimming test must be completed within the first month of training.

Advanced Mission Training
The advanced mission training phase (lasting ten months) is where the astronauts receive their crew and mission assignments. They focus on exercises, activities, and experiments directly related to their mission, and familiarize themselves with the power tools and other special devices they will use during their mission.

Are you suited to be an astronaut?

Astronauts have distinct personalities. They tend to be investigative individuals, which means they’re intellectual, introspective, and inquisitive. They are curious, methodical, rational, analytical, and logical. Some of them are also artistic, meaning they’re creative, intuitive, sensitive, articulate, and expressive.

Does this sound like you? Take our free career test to find out if astronaut is one of your top career matches.

When in orbit, an astronaut will spend most of their time in the craft or space station, occasionally having to do a spacewalk to make repairs, or deploy a satellite, etc.

Astronauts are also known as:
Cosmonaut