What is an Astrophysicist?

Astrophysicists are scientists who study the physical properties and processes of celestial objects, the physics of things beyond the Earth. The sun, the moon, the planets in our solar system, stars, and distant galaxies constitute their subject matter.

They study the theoretical aspects of space or apply their knowledge of physics to explore occurrences in space such as dark matter, black holes, stellar evolution, super clusters, and neutron stars. They seek to understand how the universe began, how it works, what it means, our place in it, and they may even try to predict how it might end.

What does an Astrophysicist do?

To begin to understand what astrophysicists do, let’s begin by articulating what distinguishes the three sibling sciences of astrophysics, astronomy, and cosmology.

Astrophysics is a science that uses the laws of physics, chemistry, and math to explain how the universe works.

Astronomy is the study of things in outer space, like galaxies, planets, stars, asteroids, comets, nebulae, and different phenomena occurring in outer space.

Cosmology is the study of the entire universe, from its violent beginnings during the Big Bang to what’s happening right now to its eventual demise. 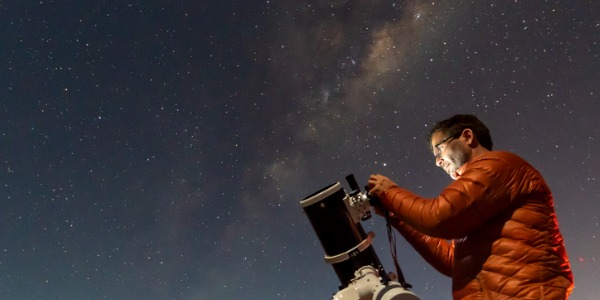 Despite these distinctions, the lines between astrophysics, astronomy, and cosmology blur, as evidenced by NASA’s definition of the goal of the astrophysicist: to ‘discover how the universe works, explore how it began and evolved, and search for life on planets around other stars.’

In other words, the work of the astrophysicist, the astronomer, and the cosmologist are inextricably intertwined. Still, we are able to convey the primary roles of astrophysicists, largely depending on whether they work in theoretical or observational astronomy.

Theoretical astrophysicists develop computer or analytical models to describe astronomical objects and phenomena. They use these models to analyze space objects and pose theories about them. Since their subjects are too far away to touch, they use the properties of physics and math to test their theories.

For instance, they may be concerned with how the universe’s first galaxies appeared and what the stars in those galaxies were like. Sometimes, they even describe events we cannot observe with our current technology, such as the entire of existence of a solar system, that is, from birth to death.

Observational astrophysicists focus on acquiring data from observations of celestial objects, which is then analyzed using basic principles of physics. Their work is what we typically think of when we use the term astronomy – observing the celestial objects of outer space, such as stars, galaxies, and planets.

Here is an overview of some of the tasks that together, theoretical and observational astrophysicists carry out:

The most common workplaces for astrophysicists are colleges and universities, government agencies, public and private research facilities, the biotechnology and aerospace industries, and science centers and planetariums.

Depending on their position in these various settings, astrophysicists may work independently or as part of a research team. Their typical responsibilities include conducting fieldwork, analyzing and interpreting data, and drafting applications for grants to obtain funding to complete additional research.