What is an Archaeologist?

Most people’s understanding of archaeology comes from TV shows like Indiana Jones. Unfortunately, there is very little Indiana Jones style adventure in archaeology. Although archaeologists do get to travel to cool places, what they are really looking for is information, not treasure.

Archaeology is one of the main sources we have to unearth history and to piece together the people and cultures that make us who we are today. It is the scientific study of the human past, and is one of the four sub-fields of anthropology.

Archaeologists study the origin, development, and behaviour of human beings and their societies, both past and present. They examine cultures, languages, behaviours, archaeological remains, and physical characteristics of people in many parts of the world. They ask questions and develop theories.

What does an Archaeologist do?

Archaeologists use scientific sampling techniques to guide them as to where they need to dig on the site. They observe, record, categorize, and interpret what they find, then share their findings with other scientists and the public. 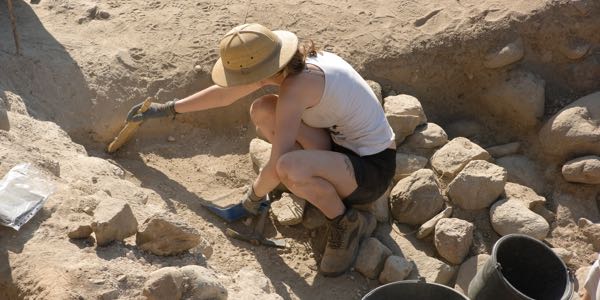 Drawing and building on knowledge from the humanities and social, physical, and biological sciences, archaeologists examine the ways of prehistoric societies in various parts of the world. They also examine the customs, values, and social patterns of different cultures.

To the archaeologist, history is separated into eight distinct time periods. Each time period can also be sub-divided into more specific periods. Many archaeologists have committed their lives to studying only one branch:

Many archaeologists use sophisticated tools and technologies in their work. Although tasks vary by specialty, materials often include excavating tools, laboratory equipment, statistical and database software, and geographic information systems (GIS).

An archaeologist will typically do the following:

There are different kinds of archaeologists:

Archaeological photographers - take photos of the site before, during, and after excavation; and of individual relics

Environmental scientists - study and reconstruct the relationships between past societies and the environments they lived in. They work to identify the diet, health and living conditions of these societies

Finds curators - organize the long-term storage and aftercare of artifacts

Are you suited to be an archaeologist?

Archaeologists have distinct personalities. They tend to be investigative individuals, which means they’re intellectual, introspective, and inquisitive. They are curious, methodical, rational, analytical, and logical. Some of them are also artistic, meaning they’re creative, intuitive, sensitive, articulate, and expressive.

Does this sound like you? Take our free career test to find out if archaeologist is one of your top career matches.

Although some archaeologists work in a typical office setting, many work in laboratories or in the field. Fieldwork sometimes requires workers to travel. Most work full-time during regular business hours.

Archaeologists work for research organizations, colleges and universities, museums, consulting firms, private corporations, and in all levels of government. They can also work for cultural resource management (CRM) firms. CRM firms identify, assess, and preserve archaeological sites and ensure that organizations, such as developers and builders, comply with regulations regarding archaeological sites.

Archaeologists often do fieldwork, either in their own country or in foreign countries. This may involve learning foreign languages, living in remote villages, or examining and excavating archaeological sites. This profession often requires travel for extended periods of time and may involve work in remote areas. Archaeologists may work under rugged conditions, and their work may involve strenuous physical exertion.