What is an Astronomer?

Do planets, stars, galaxies, and solar systems fascinate you? Would you love to understand how and why the universe works the way it does?

The study of astronomy is the oldest of the natural sciences. It is the only science in which you can study and observe physics at work throughout the whole universe, and yet not physically be able to touch what is being studied. Interestingly, it was the invention of the telescope that enabled astronomy to develop into a modern science.

An astronomer will spend his or her time analyzing data, writing research papers, or creating computer programs that allow a more effective search for the data collected.

What does an Astronomer do?

An astronomer is a scientist who focuses primarily on the study of space, which includes the stars, the planets and the galaxies above us. The evolution of stars is also studied so as to understand how the sun and our solar system of planets were created and what will happen to them as they age. 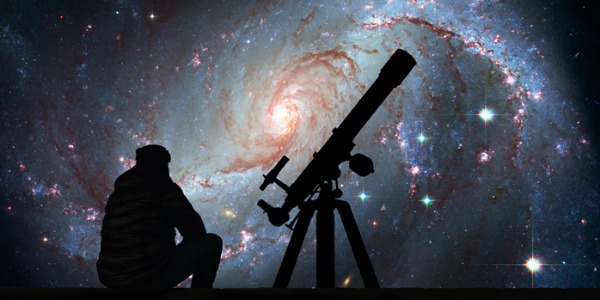 The bulk of an astronomer's job is heavily based on research, as the focus is on understanding how the universe works, and on trying to discover things about the universe that would be considered scientific breakthroughs.

The main tools used by astronomers are:

Astronomers use all these tools quite often, especially telescopes (along with applying a lot of physics and mathematics. They are able to use a variety of telescopes to observe objects in the Universe - some of these telescopes are located here on planet earth and some are sent into space.

Only the very closest planets (all within our Solar System) can be reached by spacecraft. Therefore, telescopes or earth-orbiting satellites are relied upon to indirectly give us information about all other celestial objects by observing light emitted or reflected from them.

Telescopes gather light from distant objects and let us see them "up close." It is through the collection and detailed analysis of this light that astronomers are able to unlock some of the many mysteries of the Universe. If fact, the main purpose of using a telescope is to collect this light so the astronomer can analyze and interpret this data.

An example of a telescope astronomers use is The Hubble Space Telescope. It can see out to a distance of several billions of light-years (a light-year is the distance that light travels in one year, about 5,865,696,000,000 miles). The farthest that the Hubble Space Telescope has seen so far is about 10-15 billion light-years away. Several of the Hubble Deep Field galaxies that astronomers are able to see are as they were billions of years ago, because this is how long it took for the light to reach us.

Astronomy can also be divided according to its links with other branches of science, as it can apply physics, biology and geology to explain the origin and evolution of space, stars and celestial bodies. Those four sub-fields are: astrophysics, astrometry, astrogeology, and astrobiology.

Are you suited to be an astronomer?

Astronomers have distinct personalities. They tend to be investigative individuals, which means they’re intellectual, introspective, and inquisitive. They are curious, methodical, rational, analytical, and logical. Some of them are also artistic, meaning they’re creative, intuitive, sensitive, articulate, and expressive.

Does this sound like you? Take our free career test to find out if astronomer is one of your top career matches.

Workplaces for astronomers can vary. Typical classroom settings are common for those who teach. Oftentimes, astronomers are invited to give individual talks at other institutions. Most universities (with astronomy departments) hold weekly meetings where they bring in scientists from other universities to talk about their research.

Observatories are also typical workplaces and provide astronomers with labs. The ultimate goal for any astronomer, however, is almost certainly a career at NASA. NASA is a United States government agency that is responsible for science and technology related to air and space.

Working in an office usually involves doing administrative work or working on research. Research could mean a wide variety of things, such as calibrating and analyzing data, to running numerical models, or testing theories. Much time is spent in front of a computer, therefore familiarity with computers and programming is a necessity in this career.

Traveling involves going to several conferences every year, which are held all across the world. For example, the AAS (American Astronomical Society) and IAU (International Astronomical Union) meetings are held at different venues every year. There are fewer than 20,000 astronomers in the world, therefore these conferences provide excellent opportunities to interact with other astronomers and to see what research they are working on.

Observational astronomers often have to travel to various observatories to carry out their research, as these observatories are located all over the world, from Puerto Rico, to Hawaii, Europe, Australia, Chile, or even the South Pole.

Astronomers spend a lot of their time reading publications like the Astrophysical Journal for example, either learning new subjects, or just keeping up with major developments and current research in the field of astronomy. Often, the first part of the day is spent checking out the new astronomy papers that have been uploaded on the arXiv, an open-access archive of new journal articles.