What is a Crocodile Wrangler?

Are you drawn to working with reptiles? Do you have an adventurous spirit? You may want to consider working as a crocodile wrangler!

A crocodile wrangler does a variety of things, from studying and saving crocodiles to performing in front of a live audience. Some wranglers are also called in to people's properties to remove a crocodile or alligator from a backyard or a pool.

What does a Crocodile Wrangler do? 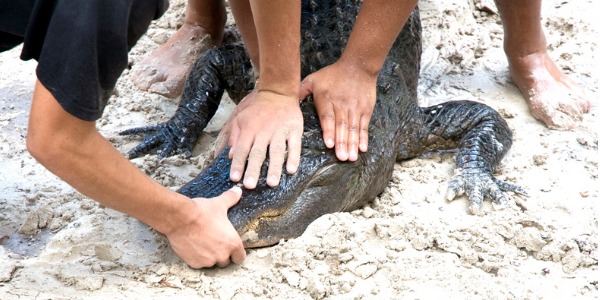 Crocodile wranglers are herpetologists that specialize in large reptiles like crocodiles and alligators. They track down crocodiles to protect them from hunters as well as the public.

In the Florida Keys, crocodiles are becoming somewhat of a nuisance for the people that live there, and house owners sometimes wake up to find a crocodile in their backyard or their pool. A crocodile wrangler isn’t called in to kill the animal, but to remove it from the residence.

The crocodile is taken out of the backyard or pool with some clever maneuvering, transported out of the area, and moved to an environment that’s better suited for the animal. Relocation could be out in the wild, in order to preserve the animal.

Crocodile wranglers work in teams to capture the crocodiles, which can be as long as sixteen feet and weigh up to 2,600 pounds. They surround the crocodile and loop a rope over its upper jaw, clamping the jaw shut. The closing muscles of a crocodile's jaw are very strong, but the muscles to open the jaw are much weaker.

Once the mouth is clamped shut, the wrangler wraps adhesive tape around the snout so they can’t bite anything. To immobilize the crocodile and transport it, they flip the animal on its back and secure its feet with rope. A crocodile wrangler and his team have to always be sharp and aware so that they don’t get hurt. One wrong move could result in the loss of a limb or even death.

Wranglers might also work full time at parks where the crocodiles are part of a show for the public. They know their crocodiles very well, but are always on guard in case they do something unpredictable. They also educate the public on their habits, history, and biology.

What is the workplace of a Crocodile Wrangler like?

Crocodile wranglers work for zoos, wildlife organizations, or can be self-employed.

Crocodiles are cold-blooded animals that like to live in warm climates, therefore your 'work' area could be in Florida, Cambodia, or even the outback of Australia. Regardless of where you are located, the work will involve mud, dust, and water.