What is a Music Producer?

A music producer is someone who makes sure that when recording a song or making a record, the end result is as good as it can be by ensuring that a song is well produced and well recorded. It may mean giving the band or singer advice when it comes to certain aspects of their performance, or making sure the engineer is doing his job the best way possible.

A music producer understands every aspect of studio production, and is well-rounded when it comes to how instruments and voices produce recordable sound. The job may be as passive as merely listening and nodding approval, or as involved as placing microphones properly and even running a soundboard. A music producer is much the same as a director in a film, overseeing each and every detail with the hope of producing a potential hit.

What does a Music Producer do? 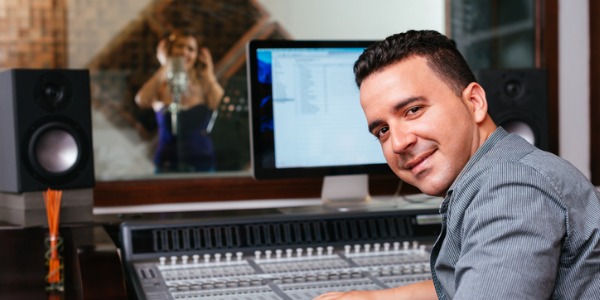 A music producer is the visionary for the overall sound and feel of a record or album. They visualize and imagine the end result, so they must be able to listen, experiment, and explore all aspects of music. Since producers can have a diverse set of skills, there are several potential roles they can play. Though not exclusive, some of these roles are:

Musician -
performs the instrumental or vocal part of a track

Music Manager -
in charge of making sure the album gets produced; from hiring the right people to getting the job done and making sure all deadlines are met

Remixer -
takes parts from a recording to make a new version

A producer’s skill is not directly tied to their technical knowledge of music, like playing an instrument or understanding how the technology works, though that is a huge help. Their main role is overseeing the entire production of an album, from working with sound engineers, managers, songwriters and artists, and creating a cohesive environment where all parties can work together and produce an album that gets everyone excited. Most importantly, the producer is in charge of making a song sound the way he or she thinks it should sound to be competitive within its market.

Are you suited to be a music producer?

Music producers have distinct personalities. They tend to be artistic individuals, which means they’re creative, intuitive, sensitive, articulate, and expressive. They are unstructured, original, nonconforming, and innovative. Some of them are also enterprising, meaning they’re adventurous, ambitious, assertive, extroverted, energetic, enthusiastic, confident, and optimistic.

Does this sound like you? Take our free career test to find out if music producer is one of your top career matches.

What is the workplace of a Music Producer like?

The typical workplace of a music producer is in a music studio where the majority of time is spent working with sound engineers and artists to perfect the production of a song. While a lot of time is spent with other professionals, there is also time spent alone in the studio making a track sound just right. Music producers sometimes work long or irregular hours to meet deadlines.

Steps to becoming a Music Producer

Listen to music. Become a musician. Make music. Get a degree. Complete an internship. Network and take advantage of industry resources. Find and promote new artists. These are the most common steps on the pathway to becoming a music producer.

How long does it take to become a Music Producer?

Because there is no standard level of education required to become a music producer, there is no standard answer to this question. However, many aspiring producers – though not all – choose to establish a foundational knowledge base by earning a Bachelor of Science Degree in Music Production or a Bachelor of Music. Others wishing to work in the field may forego this formal education and pursue the career via a strictly informal track of constantly making music and intense networking.

Beyond a four-year music-focused undergraduate degree, there is no determining the typical length of time needed to officially enter the field. Connections, dedicated and effective networking, and luck usually all play a part in the process.

Music producers rank among the happiest careers. Overall they rank in the 100th percentile of careers for satisfaction scores. Please note that this number is derived from the data we have collected from our Sokanu members only.

This extraordinary, perfect happiness quotient in the field is very likely a reflection of the creative nature of producing music. People who do creative work consistently report the highest levels of on-the-job satisfaction and interest in their work, compared to employees in the accounting and finance, administrative, legal, and technology fields.

Based on our pool of users, music producers tend to be predominately artistic people. This comes as no surprise, because music production is an art, a fluid and creative process aimed at evoking emotion in performers and audiences alike.

Should I become a Music Producer?

The answer to this question lies in the answer to another question: Which skills will you need to succeed as a music producer?

Musical Aptitude Music producers do not need to be classically trained musicians. In fact, many of them are self-taught. But since the majority of people in the field are musicians, it is clear that a musical grounding of some kind is vital.

Interpersonal Skills Recording projects involve a significant number of people working in various roles and in close confines. The capacities to work with different personalities and when needed act as mediator or peacemaker are invaluable for music producers.

Creativity The best music producers can offer creative advice to their musicians. They also know when their input is called for and when they should defer to other professionals in the room.

Leadership In every creative process there must be a leader who is capable of laying down ground rules and of demanding the best of others. In the music production field, these responsibilities fall to the music producer.

Project Management Abilities As is the case with any kind of project, successful music production occurs with established proven workflows. The best music producers possess organizational skills and confidence to effectively direct technicians and artists. And while the production of music is by its nature creative, some kind of business background allows producers to remain pragmatic and aware of what the project requires.

Self-Motivation The work of music production is not a 9-to-5 venture. It is work that relies on a personal dedication to the craft, especially in the face of inevitable stumbling blocks, from studio availability to temperamental musicians to demanding business partners.

Patience Patience is an invaluable skill in any walk of life. For the music producer, it is a must. It is rare for projects to proceed without issues. Most will involve dealing with time constraints, people who work at a different pace than your own, retakes, rewrites, and delays. Quite simply, the job of facilitating creative expression typically demands massive levels of patience.

Capacity to Merge Art with Business Music producers who reach the pinnacle of their field will be dealing with large corporate labels where profit is everything. In this scenario you will need to be able to balance commercial viability with artistry.

A Head for Numbers Music production is about more than just producing music. It is about producing a budget, weighing costs, and contracting technicians. A head for numbers, therefore, is a definite asset.

Promotional and Marketing Capabilities Producers with some knowledge of management, promotion, and marketing have an advantage, because they understand the entire process of how a track is marketed and distributed to its audience once recorded.

Networking Skills The music industry is one in which relationships are crucial. Therefore, a talent for networking is indispensable to connect with other producers, studios, labels, artists, and publishers. How you treated someone five or ten years ago will often have an impact on potential future opportunities. Case in point: Jimmy Iovine started off as a janitor in a recording studio. He worked his way up and formed a relationship with a young musician named Bruce Springsteen. Now he runs Apple Music.

Capacity to Take Constructive Criticism Every accomplished music producer knows that as soon as they put their music in the public domain, they are likely to get some criticism. Some of the criticism will be constructive feedback; some of it will be unfounded jabber. Learn to absorb the former and ignore the latter.