What is a Composer?

Do you have a good ear for music? Is creating original music a passion of yours? You may have what it takes to be a great composer!

They help to tell a story in a film, television show, play, or video game. The soundtrack they create must suit the project and convey the appropriate mood and tone.

What does a Composer do? 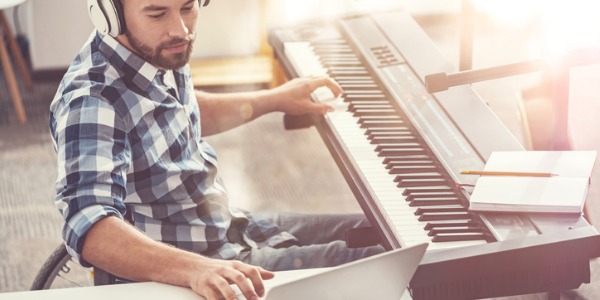 Composers create and arrange musical scores for anything that requires a soundtrack. The scores written need to be technically correct in order to create flawless performances by choruses, musicians or instrumental ensembles. Sound recordings produced from the score vary in style and may reflect the classical, country, folk, jazz, techno, or pop genres.

The score might bring mood or emotion to a dramatic scene in a play, or provide a tempestuous backdrop for a ground-breaking action scene in a film or video game.

In today's world of state-of-the-art technology, composers also work with advanced electronic sound equipment to perfect sound recordings on the digital level. Composers work to arrange technical aspects of each recording like harmony, rhythm, melody and tone, and then perfect them with highly technical recording equipment and software packages.

Composers will also spend time meeting with directors or producers to discuss the requirements of their contract. Discussion focuses on subjects like the mood and tone of each scene so that the composer knows what direction the soundtrack or score should take. Revisions will often need to be made before the score is deemed ready.

Are you suited to be a composer?

Composers have distinct personalities. They tend to be artistic individuals, which means they’re creative, intuitive, sensitive, articulate, and expressive. They are unstructured, original, nonconforming, and innovative. Some of them are also enterprising, meaning they’re adventurous, ambitious, assertive, extroverted, energetic, enthusiastic, confident, and optimistic.

Does this sound like you? Take our free career test to find out if composer is one of your top career matches.

Movies, television shows, video games, plays, commercials, songs, and orchestras all require composers to bring their projects to completion. Composers can work from home or in a studio to create and arrange scores for various forms of media. They also travel to and from rehearsals to direct and fine tune performances.

Composers traditionally contract their work with media or performance companies. After finishing one project, they look for the next, which could be with a different company or could even be in a different city. As a result, composers often work long, irregular hours at various locations.

Sound recording is in demand worldwide. Many composers will travel to pursue their interest in film scoring or working with performing arts companies in major metropolitan areas like London, Paris, or New York.